During the 12th week of the Dr. Eduardo Weide Luiz was the PI. The week was full of false alarms and no strong precipitation happened in Lindenberg. The rain insisted in avoiding the region, even with the presence of a frontal system passing by. There was only a bit of rain and some weaker cold pools, but it was a week of not so many interesting meteorological events over the FESSTVal sites. The region around, however, was affected by some stronger rain showers, which indirectly affected the temperature at the sites, but with no associated measured rain. 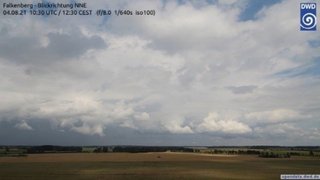 Rain on the horizon on 04 August 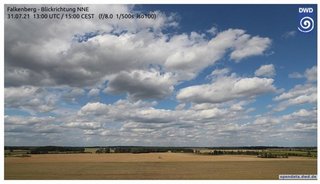 Thunderstorm approaching the FESSTVaL sites in the evening of 10 August

Sunset on 12 August. The colours indicate aerosols in the atmosphere

Interestingly, two nocturnal low level jets events happened, one related to a cold pool and another to the nocturnal temperature inversion. In addition, Sunday was relatively interesting for the gust’s enthusiasts, with winds above 10 m/s at 10 m height. Unfortunately, this week was not good for extra measurements, like the launch of some radiosondes.

Week number 13 had as PI Dr. Stephanie Fiedler and was not as unlucky as the previous week. Two impressive cold pools at the beginning of the week were measured. Both were poorly forecasted by numerical weather prediction models and characterized by sharp temperature reductions, the onset of rainfall, and an increase in near surface wind speed. Cold pool ‚Frank‘ on Monday and ‚Stephanie‘ on Tuesday came to the FESSTVaL site in the late evening around 22:00 local time. The event on Tuesday initially approached the sites directly from the West and turned slightly northward just before entering the measurement network. It was possible to witnessed lightning and a beautiful anvil of the system, as shown below.

The rest of the week was comparably calm, dry, and warm due to a semi-stationary high-pressure system that determined the local weather conditions. Largely cloud-free conditions led to ideal conditions for the development of a stably stratified nocturnal boundary layer in two consecutive nights, monitored with additional radiosonde launches around 21 and 03 UTC. The surface inversion in the first night was unusually strong for this time of the year. We have seen nocturnal low-level jets, although with relatively low wind speeds in their jet core due to the weak horizontal pressure gradient. Increased aerosol burden towards the end of the week caused scenic sunsets (see below). It has also allowed to take interesting daytime measurements of the aerosol optical depth with a new sunphotometer acquired by UoC that will be compared to the instruments installed at the radiation centre of DWD in Lindenberg. Even Friday the 13th of this week therefore was a lucky day with interesting weather and an aerosol plume passing the site - a great end just before a calm, sunny, and warm summer weekend.

More can be found on the campaigns blog